We all have the stories of the great guy who had terrible table manners, or an affinity for dragons, something that made us go from planning our futures together to avoiding his calls. My sisters and I once explained to our dad that it was like a three-strikes your out policy, his response “I wouldn’t last a minute if I were dating today!.”

If we think of selecting a mate in terms of economics, we’re looking at a loss-aversion theory, which holds that people prioritize avoiding risk over acquiring gains. “In mating, people pay more attention to what’s wrong with a would-be partner than what is right.”

A. Women are pickier than men (I’m not sure we needed scientists to tell us that)

B. Both sexes pay more attention to the negative attributes of a potential mate than positive traits they’re seeking.

Specifically this chart tells us some of the most common deal breakers:

In a series of six studies published together online in October in the Personality and Social Psychology Bulletin, researchers from Western Sydney University, Indiana University, the University of Florida, Singapore Management University and Rutgers University discovered that women have more deal breakers than men, most likely because the stakes are higher for them; they are the ones who get pregnant, so it is crucial that they are picky enough to choose a mate who is capable of helping them successfully raise that child.

In one of the studies, the researchers gave 5,541 single U.S. adults a list of 17 negative personal traits and asked them whether they would consider them deal breakers in a mate in a long-term relationship. Even though more women than men said most traits were deal breakers, there were more similarities than differences between the sexes. The biggest deal breaker for both was “disheveled or unclean,” followed closely by “lazy” and “too needy.”

More women than men found “lacks a sense of humor” to be a non-starter, possibly because humor is linked to higher intelligence. Men may not care as much about a brainy mate: A recent study from researchers at the University at Buffalo, California Lutheran University and the University of Texas at Austin found that men prefer not to date a woman who is smarter than they are.

Men found “low sex drive” and “talks too much” to be bigger deal breakers. But more women rated “bad sex” as a non-starter. So while some men may be happy if they have sex often, for some women, if that sex isn’t good, they’re gone. 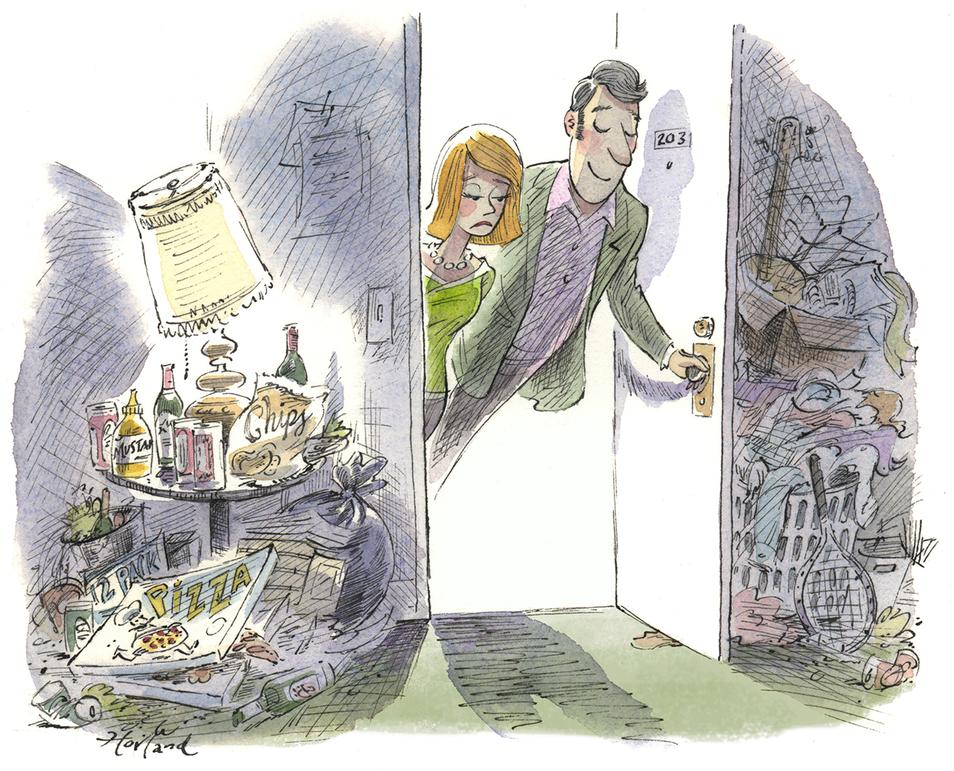 ENLARGE
Many women say being disheveled is not tolerable in a potential partner. Illustration: Gary Hovland for The Wall Street Journal

“Basically, for short-term partners, if they have a toothbrush, they’re good to go,” says Gregory Webster, associate professor of social psychology at the University of Florida, who is currently on sabbatical at the Kinsey Institute at Indiana University.

When I asked people what their deal breakers were, I got an earful. Many people said they draw the line at a partner who smokes, drinks excessively, lies, talks too loud or doesn’t know how to communicate. Lots of people refuse to date someone who won’t spend time with their family. Some aren’t interested in a person who has a dog or cat. Others won’t date someone without one. My own list of deal breakers has included poor grammar, stonewashed jeans, and a stack of self-help books on the nightstand.

Overly picky? Or not picky enough? It is a good question, psychologists say, because while it is smart to pay attention to reasonable deal breakers, if you have irrational ones you may risk missing out on a good mate. There are people who refuse to date someone with sweaty hands, crooked teeth or beards. Feet are often an issue: Stubby toes. Ugly toes. Men in sandals. Birkenstocks with socks. Birkenstocks on their own. And the list goes on.

If you want to know if a deal breaker is reasonable or ridiculous, you should “ask yourself what your best friend would say,” says Michael Boman, a licensed clinical social worker in Magna, Utah, who counsels many dating couples. “It helps you to become objective.”

When Dawn Maslar was dating 10 years ago, she created a list of five traits her future partner must have: financial and career stability, completely out of the last relationship, intelligent, good sense of humor, able to travel and enjoy life. Her five deal breakers: drug use, not established in a career, not able to vote (because of a felony), rigid in his beliefs and atheism.

She met plenty of guys who had all five of her “must-haves,” but each one had one deal breaker. One man she adored “was a sweet, good person who kind of looked like Eddie Van Halen,” she says. But when he showed up for dinner one night smelling like marijuana, she says she “had to let him go.” Another man she dated briefly was “great”—he was cute, had a great sense of humor and spoke Italian, which she found romantic. But she decided he wasn’t right for her when he said he wanted to quit his job and go to law school. “I admired his desire but didn’t want to put my future on hold while he pursued his,” says the 50-year-old college biology professor from Davie, FL

Eventually, Ms. Maslar met a man through a mutual friend who had all of the positive traits she was looking for (as well as a sense of adventure and a cute puppy) and none of her deal breakers. They’ve now been together nine years.

“I had learned the hard way in previous relationships that negative traits really can wear down a relationship,” says Ms. Maslar. “And I didn’t want to repeat those mistakes.”

We know Boko Haram uses rape as a weapon in their arsenal, but in a New York Times report this week, we learned the…