The US President visited Alaska last week and headlines ranged from:
“No, Obama isn’t a climate hypocrite,”  and “Obama Visits receding glacier in Alaska to highlight climate change,” and so on. There was a another reason for his visit, for the new interest in Alaska and the Arctic. As the sea landscape of the Arctic changes, as the ice melts, there is a race to get to the resources below. China and Russia are gearing up. The US is behind. In addition to considerable economic impact of accessing oil and other natural resources, shipping routes will be changed forever when the voyage from China to the US can go North rather than having to go through the Panama Canal. The Arctic is the new frontier. President Obama may have been the first US President to visit the Arctic, but he was not the first President to visit, as Putin was there earlier this year.

“The Russian government recently declared its intentions to claim large portions of the Arctic Ocean, alleging that the continental shelf extending into the sea is also part of Russian territory under the Law of the Sea convention. The US has yet to ratify the measure to allow Russia to make these claims. However, Russia has stated that it is willing to take as much advantage of the potential new resources as possible.”

The top military officials recently released their threat list and Russia was number one. Conjuring up images out of a James Bond flick or Empire Strikes Back, Russia seriously ramped up its military in the Arctic presence in the last year.

As if Russia weren’t enough  of a formidable threat, China sent five Navy ships within 12 miles of American soil while President Obama was visiting. Is this a coincidence?

Coinciding with Obama’s trip to the Arctic was the Chinese celebration of the 70th anniversary of an Allied victory in WWII.  “But an online article in the People’s Daily, the party’s mouthpiece, earlier this year made clear what this meant. The parade’s purpose, it said, was to “deter Japan” and “show off China’s military might”.

And guess who was one of 30 heads of state to join Mr. Xi, China’s PM, for this celebration? Oh yeah, Vladimir Putin.

“A huge display of weaponry reinforced the point. Twelve thousand troops marched past, with attack helicopters roaring overhead in a formation spelling out the number 70. China gave the world a first sight of new tanks, fighters and bombers, and of several new missile systems. These included the DF-16 medium-range ballistic missile, two nuclear-capable intercontinental types (the DF-5B and DF-31A) and the so-called “carrier killer”, the DF-21D that can destroy an aircraft-carrier in one blow (see chart). All these are of concern to America.”

In an WSJ Piece a couple weeks ago we heard a bit about this conflict, from an economic perspective:

In his message to the American people about his visit to Alaska next week, President Obama said “The alarm bells are ringing, and as long as I’m president, America will lead the world to meet this threat before it’s too late.” He was talking about climate change. But his words could just as well apply to the strategic moves that are being made in the vast Arctic region to secure its resources and potential.

Russia is taking the lead in Arctic offshore oil production. Russia began producing offshore oil at the Prirazlomnaya field in the Pechora Sea in 2014, and last year it delivered roughly 2.2 million barrels. Gazprom Neft expects to more than double oil production this year from the country’s only offshore Arctic oil project.

China isn’t far behind. Between 2009 and 2013, Chinese companies—mainly the big three, China National Petroleum Corp., Sinopec and China National Offshore Oil Corp. (Cnooc)—were the largest buyers of international oil assets. Several of these acquisitions were made with the Arctic in mind, such as Canada’s Nexen and Russia’s Yamal LNG. Early last year, Cnooc obtained an exploration license for Iceland’s Dreki region in the Norwegian Sea. The company is also expected to be involved in Norway’s 2016 licensing round in the Barents Sea.

Russian and Chinese activity goes beyond a scramble for resources. Russia has added a 6,000-soldier permanent military force, including radar and sensing networks, in the Arctic’s northwest Murmansk region. Russia recently submitted a large extended continental-shelf claim for the Arctic, which, if accepted, will give Russia rights to seabed resources beyond its 200 nautical-mile exclusive economic zone. China’s maritime activity in the region has increased, and it is making significant investments in Arctic research, infrastructure and natural-resource development. Although not an Arctic nation, China sees the value in building modern icebreakers to support its activity in the polar regions—north and south.

Here’s what the military was reporting on while everyone else was talking about the environment:

At the American Legion on Tuesday, the U.S. defense secretary warned against complacency.

“We do not seek to make Russia an enemy,” Defense Secretary Ash Carter said. “But make no mistake: While Vladimir Putin may be intent on turning the clock back in Russia, he cannot turn the clock back in Europe. We will defend our allies.”

Russia has re-established Soviet-era military bases across the Arctic and begun building a string of search-and-rescue stations along its Arctic shores. In April, Russia’s economic minister explained the importance.

After invading Ukraine, Russia pulled out of the Arctic Council, a consortium of eight countries that includes the U.S.

Meanwhile, the U.S. only has two functioning icebreakers. Russia has 41, with plans to build 11 more. Obama on Tuesday, while highlighting the effect of climate change, announced he will speed up acquisition of these coveted ships though they won’t be ready until 2020.

The commandant of the U.S. Coast Guard has warned the U.S. is already behind.

“Russia has one-eighth the gross domestic product of the United States. Clearly the Arctic is a priority for Russia,” Adm. Paul Zukunft said in February during his “State of the Coast Guard” address. “There’s a new ocean opening. Coast Guard authorities mandate our presence wherever U.S. national interests require people and ships to operate.”

Meanwhile, the U.S. Army, facing budget cuts, plans to pull out 3,000 troops from Alaska, in what some say is poor timing as the U.S. plays catch-up to Russia in the Arctic.

“Russia has increased its military presence in the Arctic in the last few years. In 2012, after a large-scale naval exercise which included more than 7,000 people and some 20 vessels, personnel from the Northern Fleet conducted Russia’s first amphibious landing on the Arctic archipelago of the New Siberian Islands.”

Russian Exercises According to Russian statements, the snap exercise, which was not announced before it began March 16, will last five days and will involve some 45,000 servicemen, around 3,000 vehicles, more than 40 surface vessels, 15 submarines and 110 aircraft. The more notable systems involved are the Iskander mobile theater ballistic missiles and fighter aircraft that are being deployed to Kaliningrad, Tu-22M3 long-range strategic bombers that are being deployed to Crimea, and ballistic missile submarines that have been sent to sea with protective escorts. 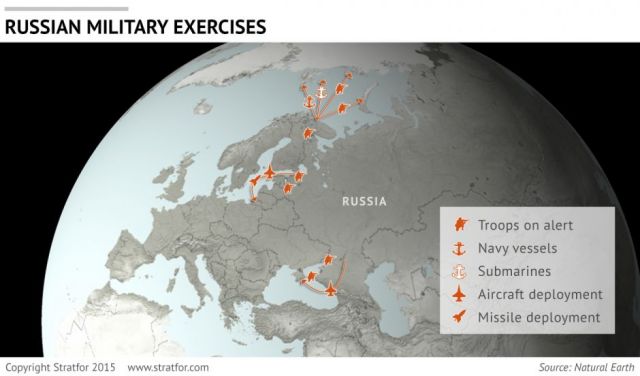 The initial statement on the exercise focused on the role of the Northern Fleet, saying the main purpose of the drill was to test deployment times to Russian positions in Novaya Zemlya and Franz Josef Land. Russia has increased its military presence in the Arctic, and the exercise highlights Russia’s plans for the Arctic region. This part of the drill seems to be playing out in a rather straightforward way: Russian forces are being airlifted to Russia’s Arctic bases and several naval exercises are taking place, including anti-submarine operations and mine sweeping procedures that typically precede the snap sorties of nuclear armed submarines in times of crises.”

The NYT seems to have missed this story with only a mention here of the brewing conflict:

“Arctic ecosystems are among the most pristine and understudied in the world, meaning increased commercial activity comes with significant risks to the environment,” the White House said in a statement.

The aging Coast Guard fleet is not keeping pace with the challenge, the administration acknowledged, noting that the service has the equivalent of just two “fully functional” heavy icebreakers at its disposal, down from seven during World War II. Russia has 41 of the vessels, with plans for 11 more. China unveiled a refurbished icebreaker in 2012 and is building another.

Gov. Bill Walker of Alaska, a political independent who traveled to Anchorage with Mr. Obama on Air Force One on Monday, said he was concerned that the United States military was drawing down in his state just as Russia was flexing its muscles.

“It’s the biggest buildup of the Russian military since the Cold War,” Mr. Walker said, noting Alaska’s proximity to Russia. “They’re reopening 10 bases and building four more, and they’re all in the Arctic, so here we are in the middle of the pond, feeling a little bit uncomfortable.”

Imagine your sister, mother and niece are rounded up by terrorists and taken to be sold as sex slaves. Would you just sit around and…