Is it fair for a work culture to drive employees away? Academic institutions develop reputations for rigor, high expectations or inflated grading systems, so why don’t we accept that major corporate institutions have a similar kind of individuality? If you don’t like that it’s cool for your boss to text you at 2 am, then go to a different company, right? Or is it that we want so badly want to have a work-life balance that these uber competitive work environments threaten our very notion of progress. If Jeff Bezos expects excellence, and that includes a Saturday morning bookclub with your managers, do you push back or feel like you have attend? How much is too much for you?

Our forth pick this week is from Vox. It’s an analysis of the New York Times expose that shook the world’s largest online retailer, Amazon.com. The Voz story considers the responses from employees and Bezos on The Times story. We recommend you read both, though if you only have time, read the Vox story. 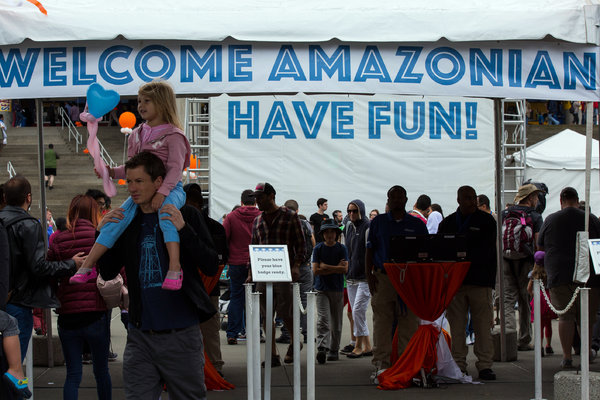 The anecdotes from the article are searing. “Nearly every person I worked with, I saw cry at their desk,” said Bo Olson, who worked in Amazon’s book marketing department. A woman who gave birth to a stillborn child recalled being told that “to make sure my focus stayed on my job.” Other employees report emails that land after midnight and are followed by texts if a reply doesn’t materialize quickly enough. The article details an internal system that allows Amazon’s employees to anonymously report on each other’s work habits.

The Times story, by Jodi Kantor and David Streitfeld, is an incredible piece of reporting, boasting interviews with “more than 100 current and former Amazonians.” But it’s also led to a fierce backlash from inside the company — and from the tech industry more broadly.

Current Amazonians — including CEO Jeff Bezos — say the story gets basic facts about working at the company wrong and is mostly driven by the complaints of disgruntled employees who have left the organization.

But behind both the Times article and the responses to it is a larger debate about the future of high-prestige, white-collar work in America and the toll it takes on family life. This article, like many before it, is fundamentally about whether some of the most privileged, productive, and highly compensated workers in the world can have both the job they want and the life they want.

For employees who love what they’re doing, are exceptionally talented at it, and find the work rewarding and even fun, Amazon is probably a great place to work — hard, sure, but worth it. But if that doesn’t describe you? Then working at Amazon is a nightmare. Your bosses are asking you to do more than you’re able to accomplish, in less time than you need to accomplish it, and as you fall behind, they begin questioning your work ethic and demanding ever more ridiculous displays of commitment.

As Amazon’s growth accelerated, Bezos drove employees even harder, calling meetings over the weekends, starting an executive book club that gathered on Saturday mornings, and often repeating his quote about working smart, hard, and long.

As a result, the company was not friendly toward families, and some executives left when they wanted to have children. “Jeff didn’t believe in work-life balance,” says Kim Rachmeler. “He believed in work-life harmony. I guess the idea is you might be able to do everything all at once.”

Evidence of this friction usually emerged during the question-and-answer sessions at the company’s regular all-hands meetings, held for many years at Seattle’s oldest playhouse, the Moore Theater. Employees would stand up and pose direct questions to the executive team, and often they inquired about the enormous workload and frenetic pace.

During one memorable meeting, a female employee pointedly asked Bezos when Amazon was going to establish a better work-life balance. He didn’t take that well. “The reason we are here is to get stuff done, that is the top priority,” he answered bluntly. “That is the DNA of Amazon. If you can’t excel and put everything into it, this might not be the place for you.”

Even as the company tests delivery by drone and ways to restock toilet paper at the push of a bathroom button, it is conducting a little-known experiment in how far it can push white-collar workers, redrawing the boundaries of what is acceptable. The company, founded and still run by Jeff Bezos, rejects many of the popular management bromides that other corporations at least pay lip service to and has instead designed what many workers call an intricate machine propelling them to achieve Mr. Bezos’ ever-expanding ambitions.

However, more than 100 current and former Amazonians — members of the leadership team, human resources executives, marketers, retail specialists and engineers who worked on projects from the Kindle to grocery delivery to the recent mobile phone launch — described how they tried to reconcile the sometimes-punishing aspects of their workplace with what many called its thrilling power to create.

According to early executives and employees, Mr. Bezos was determined almost from the moment he founded Amazon in 1994 to resist the forces he thought sapped businesses over time — bureaucracy, profligate spending, lack of rigor. As the company grew, he wanted to codify his ideas about the workplace, some of them proudly counterintuitive, into instructions simple enough for a new worker to understand, general enough to apply to the nearly limitless number of businesses he wanted to enter and stringent enough to stave off the mediocrity he feared.

“You can work long, hard or smart, but at Amazon.com you can’t choose two out of three,” Mr. Bezos wrote in his 1997 letter to shareholders, when the company sold only books, and which still serves as a manifesto. He added that when he interviewed potential hires, he warned them, “It’s not easy to work here.”

Amazonians are instructed to “disagree and commit” (No. 13) — to rip into colleagues’ ideas, with feedback that can be blunt to the point of painful, before lining up behind a decision.

“One time I didn’t sleep for four days straight,” said Dina Vaccari, who joined in 2008 to sell Amazon gift cards to other companies and once used her own money, without asking for approval, to pay a freelancer in India to enter data so she could get more done. “These businesses were my babies, and I did whatever I could to make them successful.”

At its best, some employees said, Amazon can feel like the Bezos vision come to life, a place willing to embrace risk and strengthen ideas by stress test. Employees often say their co-workers are the sharpest, most committed colleagues they have ever met, taking to heart instructions in the leadership principles like “never settle” and “no task is beneath them.”

To prod employees, Amazon has a powerful lever: more data than any retail operation in history. Its perpetual flow of real-time, ultradetailed metrics allows the company to measure nearly everything its customers do: what they put in their shopping carts, but do not buy; when readers reach the “abandon point” in a Kindle book; and what they will stream based on previous purchases. It can also tell when engineers are not building pages that load quickly enough, or when a vendor manager does not have enough gardening gloves in stock.

Amazon employees are held accountable for a staggering array of metrics, a process that unfolds in what can be anxiety-provoking sessions called business reviews, held weekly or monthly among various teams. A day or two before the meetings, employees receive printouts, sometimes up to 50 or 60 pages long, several workers said. At the reviews, employees are cold-called and pop-quizzed on any one of those thousands of numbers.

Explanations like “we’re not totally sure” or “I’ll get back to you” are not acceptable, many employees said. Some managers sometimes dismissed such responses as “stupid” or told workers to “just stop it.”