Get great contents delivered straight to your inbox everyday, just a click away, Sign Up Now.
Dawn Oates, interviewed in October 2015, channels her contagious energy pushing for inclusive — rather than exclusive — opportunities for children with disabilities.
Imagine: Your child giggling as she loses control of her body down a steep slide, at the bottom her brother, your son, squeals with delight as he challenges her to race back to the top. This routine creates a bond, it fuels healthy competition, it excites the soul, it builds confidence and independence. As a mother you look on with empathetic delight. There is little more enjoyable than watching you two children play together.
Now, imagine the above scenario only this time you’re sitting with your youngest daughter, who’s legs are paralyzed, and the use of her arms and hands is greatly limited. She and you look on as the older kids play. As they develop. Your youngest would love to join them, but she can’t.
This changes the paradigm, it shifts the scenario from one of bliss to one of torture. This is the story of how Play Brigade was conceived.
From the Play Brigade web site

“Our daughter Harper was born blue, not pink and rosy-cheeked like her older twin siblings. She had a debilitating spinal cord injury at birth.

When our twins were three, we took them to the playground down the street and to summer camp. We went skiing, hiking, and bowling as a family. But with Harper, we quickly learned that “wheelchair accessible” might mean a ramp to get in, but not shared access to the equipment, her friends, or the fun.

Harper has taught us to try harder, to never give up, and that despite our children’s differences in ability, they want to play. Together.”

Dawn Oates recognized a need in her child. All children want to play, we all want to have fun. Oates recognized that this was a challenge for a little girl who couldn’t access the usual play spaces. Viewing the world through her daughter’s eyes, Oates identified an incredibly opportunity.
Our play spaces are exclusively for those children who don’t have limitations. We need to have more play areas for all kids to enjoy the simple pleasures of childhood: going down a slide, feeling the breeze and rhythm created by the sway of a swing, exploring the woods and learning to natigate your world, your way.  These are the moments in childhood when big developments happen, when identity is formed and a sense of adventure and independence is fostered. To deny these experiences is to limit the potential of our children.
Through Dawn’s sheer force and passion, she is making Boston a leader in inclusive play. She is changing the way we think about communal spaces. She is inviting leaders and pioneers to work together to open play to all. Her organization, The Play Brigade, partners with outdoors initiatives to get disabled children canoeing, hiking; they’re even working with Indianapolis 500 to partner on a 5k road race for athletes of all abilities, coinciding with the Boston exposition scheduled for 2016.
Check out the full interview on our podcast, or the edited broadcast version.

From the Boston Globe:

Four-year-old twins Jack and Olivia Oates were having so much fun at day camp this summer that one afternoon when their 2½-year-old sister, Harper, showed up with their mother at pickup time, they asked to give the toddler a tour.

But when the twins wanted to stop and play on the camp’s playground with their sister, Dawn Oates pointed out it wouldn’t be much fun for Harper, and Jack quickly concurred, declaring with the directness of a preschooler, “Yeah, this playground is only for people who can walk.”

It was a heartbreaking moment for the Brookline mother, but it was also a feeling that she has become accustomed to ever since Harper was born with incomplete quadriplegia, which causes paralysis in her legs and in parts of her arms and hands.

Nonetheless, Dawn Oates isn’t one to silently lament her daughter’s limitations. Instead, she has set about to make changes — changes that may begin in Harper’s immediate world, but have the potential to reach far beyond.

Oates is establishing a nonprofit organization, the Play Brigade, whose mission is to make playgrounds more accessible for children like Harper.

As Oates points out, the same accommodations for youngsters in wheelchairs will also benefit children and adults with other limitations, ranging from conditions on the autism spectrum to pregnancy, joint or back problems, and postsurgical recovery.

When Harper was born in December 2011, her parents were devastated to learn of her physical disabilities. According to Oates, the child’s entire first year was consumed with hospitalizations, medical discussions, and heart-rending decisions affecting her future.

‘The opportunity to play is one of the most important things you can give a child. Here we were giving our daughter all this medical care to keep her alive, but what’s the point if you can’t experience the basic joys of childhood?’ — Dawn Oates, Brookline resident

But soon after Harper’s first birthday, Oates and her husband, Justin, experienced a moment of awakening.

“Once Harper started talking, we realized how much potential she had, and it was like the sky cleared for us,” Dawn Oates recalled. “It was then that we began to see her as an intelligent, funny, charming, amazing kid. So instead of being consumed with thoughts of what the paralysis would mean to her and how to keep this child with so many medical complexities alive, I began thinking instead about how we could give a child with so many significant limitations a chance to live an amazing and fulfilling life.”

More than anything, Oates believed, her daughter needed to be able to play.

“Playing is a child’s job,” she declared. “It is the cornerstone of human interaction, the foundation of social relationships. It teaches problem solving; it helps kids to explore their emotions; it enables them to develop a sense of community. The opportunity to play is one of the most important things you can give a child. Here we were giving our daughter all this medical care to keep her alive, but what’s the point if you can’t experience the basic joys of childhood?”

The Oates hired Erin Connelly, a child-life specialist whose role involves helping Harper to play, learn, and interact with her siblings in positive and developmentally appropriate ways.

When Connelly inquired about taking Harper to one of the town’s playgrounds within walking distance of the family’s Chestnut Hill home, Dawn Oates contacted Brookline’s Parks and Open Space Department to ask about special equipment for children with disabilities, and was assured that each playground already had or would soon have a five-point harness “bucket swing,” considered the norm for children with disabilities.

“Brookline does a fantastic job’’ complying with Americans with Disabilities Act regulations, Oates said, and she also emphasized that town officials have been receptive to her concerns. “But ADA compliant and accessible is not the same as inclusive.”

Instead, Oates dreams of local playgrounds having the kind of equipment she’s found through extensive research, some of which she has seen firsthand at the state-of-the-art Thomas M. Menino Park in Charlestown, which is frequently visited by patients at the adjacent Spaulding Rehabilitation Hospital. Its equipment includes merry-go-rounds that children in wheelchairs and fully mobile children can whirl around on together, and slides that can be accessed by a gently sloping ramp rather than a staircase or ladder.

As Oates discussed her ideas with Parks and Open Space Department employees, they offered her a position on the Design Review Committee for the Brookline Avenue Playground, which is slated to undergo a complete renovation in the near future.

She readily accepted the role, eager to take on a position of leadership in her mission, but eventually discovered her vision for a fully accessible facility would cost about $1 million.

“There are plenty of people I can ask for donations of 25, 50, 100 dollars, but how am I going to raise a million?” she remembers asking her husband. Together, they realized the answer was to start their own nonprofit foundation.

Until governmental approval is complete for the Play Brigade to be a freestanding entity, the MOMS Club of Brookline has agreed to adopt it as its philanthropic mission, meaning that charitable fund-raising, eligible for tax-deductible donations, can begin right away.

“Ultimately, this is about so much more than just raising money to build a different kind of playground,” Oates said. “The ADA created a code that protects people with disabilities. But there’s law, and then there’s what we can all do together to go far beyond what’s required.

“Here in Greater Boston, we’re full of new ideas, creativity, and entrepreneurship. We’ve always been ahead in terms of science, technology, and medicine, and we are prideful of how we treat our children. I’m not asking for a special playground with special things for kids with special needs, I’m asking for us to think and make choices so that every person in the community feels that they can participate in a park built to accommodate them,” Oates said.

“By fulfilling this mission, we can become a leader for towns and cities nationwide. We are promoting the message that every person, disabled or fully abled, is a valued member of this community, and the community reflects those values by creating places that were made with each person and each ability in mind.” 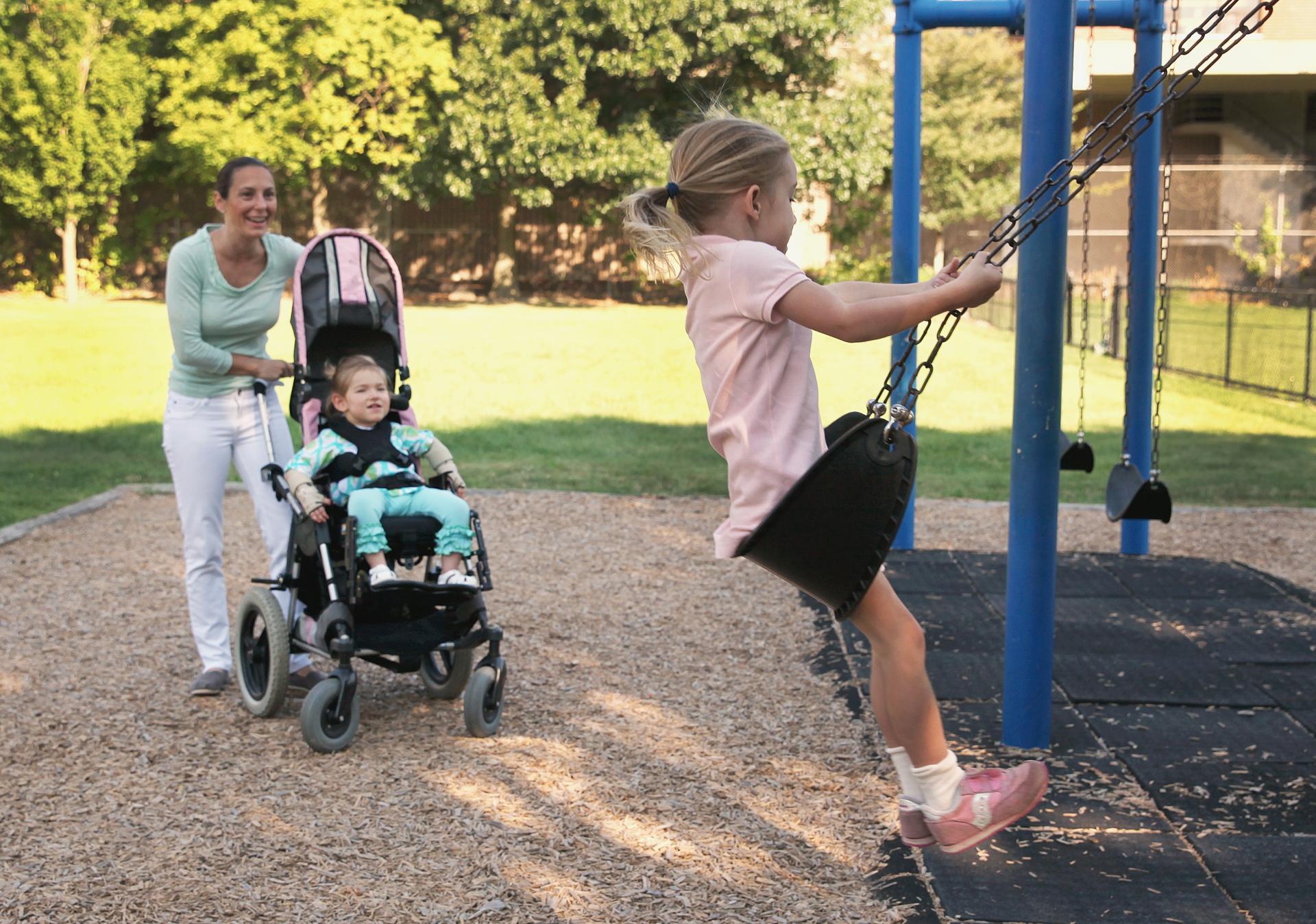 Dawn Oates and Harper, 2, watch Olivia, 4, on the swings at Brookline Avenue Playground. For Harper, a swing with seats and harnesses would allow her to sit alone.

Tax-deductible donations to the Play Brigade may be made through http://www.playbrigade.com/donate/