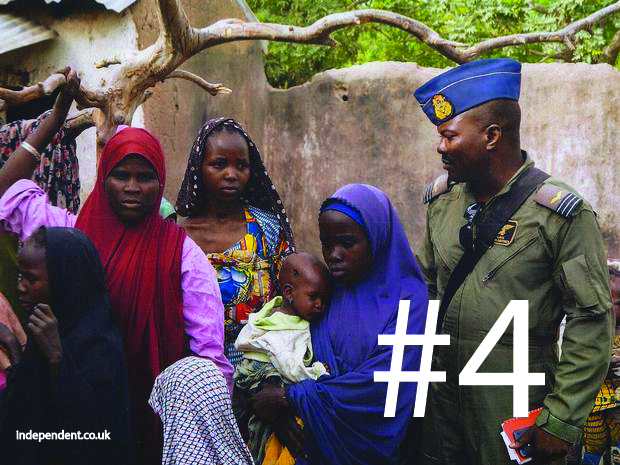 We know Boko Haram uses rape as a weapon in their arsenal, but in a New York Times report this week, we learned the Nigerian terror group is raping women and children with the goal of impregnating them.

Last week, some 200 females were rescued, and their stories paint a nightmare picture of how Boko Haram treats its female prisoners.

“The sect leaders make a very conscious effort to impregnate the women,” said the Borno State of Nigeria governor, Kashim Shettima. “Some of them, I was told, even pray before mating, offering supplications for God to make the products of what they are doing become children that will inherit their ideology.”

These victims, many now pregnant and living in refugee camps, represent a small percentage of the more than 2,000 women and girls the group has kidnapped in just the last year.

This is our fourth pick for you this week, not because it’s an easy read, but because we think it’s important to recognize rape is used a weapon of war. It’s used to disenfranchise a population, to beat out the hope of a future. Society crumbles without strong female voices, without women able to inspire their children or to advance themselves. With mothers and sister feeling traumatized, shameful and degraded, the terror group can better control the population. We cannot stand for this human rights atrocity in Nigeria, or at home. It’s easy to tune out these stories, but please don’t.

We look abroad at this kind of torture and are appalled, but we don’t do as good of a job stomping our feet at home. Ray Rice knocks a woman out cold and charges are dismissed after he pays $125 and goes to anger management.

We’ve seen unbelievable emails coming from the frat boys of Phi Kappa Tau at Georgia Tech instructing brothers on how to rape their female classmates, all protected under the veil of humor, which some kids, parents, pundits and others have suggested we not take too seriously.

We think it is serious. Very serious. We think this acceptance, this tolerance of violence in jokes and in its physical manifestation contribute to a culture of silencing women, just as Boko Haram has set out to do in Nigeria. The big difference worth considering is how there it is used in as a tool of war, whereas here it’s just part of our culture.

From ABC News: A definition of Scientology is hard to pin down. Basically, it’s a system of beliefs, teachings and rituals originally established as…