Using press clipping and seized documents the Islamic State is systematically killing Iraqis who aided US soldiers. In this WSJ piece, we hear the heart breaking calls for help from comrades now abandoned by their US counterparts. We understand the guilt the American soldiers feel, safely at home with no way to repay their debts to these Afghan soldiers.

War forces people to make choices, and many of them don’t work out. With large swaths of Iraq under control of Islamic State, many of the Iraqis who put their lives on the line to aid the U.S. during the nearly nine-year war are being marked for death by militants as collaborators. The Americans who counted on them and are now safe at home can only wait, wonder and worry.

One Iraqi begged a retired Marine general he had gotten to know during the war: “Come quickly or we’re all dead.”

Maj. Gen. Larry Nicholson, twice the Marine commander in Fallujah, says the Iraqis “did so much for us” and are paying a horrible price for it. In replies, he urges the Iraqis to stay safe and strong. The retired general who got the plea to “come quickly” has responded four times but heard nothing.

Like other U.S. military officers and diplomats who got information, support and even friendship from Iraqis during the war, Mr. Weston feels helpless and guilty about those left behind. He was political adviser to the Marines in Fallujah from 2004 to 2007—and remembers the promises made to win Iraqi cooperation. They helped turn the tide in Fallujah and elsewhere.

“We wanted them to believe that we wouldn’t abandon them,” says Mr. Weston, 42 years old.

No one knows how many allies of America’s former fighting force in Iraq have been killed by Islamic State, which uses press clippings and U.S. military studies to track down Iraqis who stood side-by-side with American troops and officials.

As the U.S. pulled out its troops from Iraq, Mr. Weston and Capt. Saad used email for updates on work and family. “I often wish I was closer so that we could visit in person,” Mr. Weston wrote in October 2011. 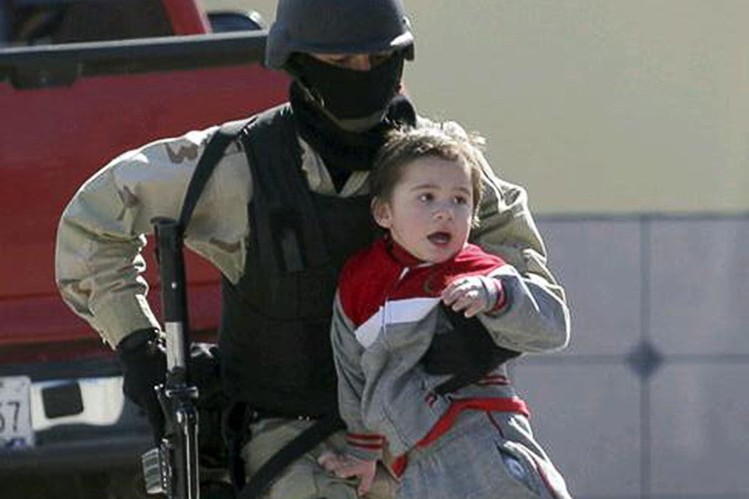 Iraqi policeman Capt. Saad wearing a facemask to disguise his identity during a training exercise in Baghdad. After Islamic State seized Fallujah in January, Capt. Saad and his family fled for their lives to Kirkuk. CAPT. SAAD

Capt. Saad soon resigned from the police force, tired of corruption in the ranks and eager to pursue his dream of teaching physics. He found a job at a boys’ high school and wrote excitedly to Mr. Weston about having a quieter life.

Mr. Weston quit the State Department and started writing a book about his wartime experiences. Iraq was never far from his mind. The sound of explosives used by the ski patrol at Utah’s Solitude Mountain to reduce avalanche risk reminded him of 155mm howitzers.

Islamic State seized Fallujah in January. On New Year’s Day, Mr. Weston got a harrowing email in broken English from a Fallujah highway-patrol officer with whom he had also kept in touch.

“Al Qaeda flags is over all the goverment buildings…..all the citizens of fallujah start to leave,” wrote the officer. “We are looking for help.”

The frantic messages stopped as suddenly as they had started. The silence left Mr. Weston with no idea if his Fallujah friends were still alive.

While Mr. Weston worried about Capt. Saad’s fate from a condominium in the Wasatch Mountains, Capt. Saad says he hunkered down with his wife and children in their home. Friends in the police force had alerted him to the arrival of Islamic State militants. The first wave had 30 to 50 fighters, who entered Fallujah unopposed.

His house in central Fallujah had a large bulletproof window in the front and was surrounded by a security wall. After Islamic State’s takeover, the family slept on the ground level, which was less vulnerable to rocket fire.

For 17 days, Capt. Saad, 39, kept a wary eye glued to a video monitor in his house, watching grainy images from a surveillance camera out front. He says he stayed awake all night and slept for a couple of hours during the day while his wife took over. He didn’t reply to Mr. Weston because his home Internet service wasn’t working and it was too dangerous to go to an Internet cafe.

Friends in the police department said local security forces had given up their weapons. Most fled. Some joined the Islamists. Militants knew who to look for, partly because the U.S. military published reports online detailing how the Marines worked with local Iraqi institutions and leaders, according to U.S. and Iraqi officials.

The police could have stopped the advance but didn’t try, Capt. Saad says. “Why aren’t you fighting?” he asked one local chief in a phone call. The officer responded without elaborating: “Can’t.”

Islamic State militants initially sought to reassure Fallujah’s residents about their intentions, saying they didn’t plan to seek revenge. “Past is past,” they told local Fallujah leaders, according to Capt. Saad. He didn’t believe it.

On Jan. 17, friends told him the roads were relatively clear of checkpoints. Capt. Saad decided it was time to make a run for safety. He planned to drive to a family farm outside Fallujah.

Loaded into two cars, the family took only the bare essentials, hoping to return, plus an AK-47 rifle that Capt. Saad kept at his side as he drove.

Capt. Saad and his wife told their children the family was going to visit the farm, which has date palms and room to play outside. On the way, they listened to one of the family’s favorite music stations, Radio Sawa, which plays Arabic and English-language songs.

While hiding in the farmhouse, a message came from a friend in Fallujah. Al Qaeda was coming. Capt. Saad decided to run again. Some of his friends had already fled to Kurdish territory in the north, and they urged him to come.

The family arrived in Kirkuk on Feb. 22, where a friend lent them a small place to live. Later, friends told Capt. Saad and his father that Islamic State militants had seized their homes in Fallujah. Two senior officers Capt. Saad knew on the police force were arrested and beheaded, he says.

After settling into the austere life of a refugee, Capt. Saad got Internet access and found Mr. Weston’s frantic messages. “hi my friend,” the exiled policeman wrote July 15. “how r u[?] miss to hear about u.”

Mr. Weston was hiking the North Rim of the Grand Canyon when the note arrived on his iPhone. He felt relieved and guilty.

“My friend, are you and father and family ok?? I’ve only read of very bad news from Anbar, especially Fallujah,” the former State Department official wrote. After watching Islamic State propaganda videos from Fallujah showing black flags flying over government buildings and killings of former U.S. supporters in the city, he didn’t sleep at all that night.

In emails tapped out on a cellphone, Capt. Saad told Mr. Weston that the Iraqi government was too weak to re-enter Fallujah. “I dont know what to do. wish to go falluja and fighting but fighting with whom ?”

In another note, Capt. Saad wrote: “ISIS everywhere and looking for us.”

Mr. Weston told Capt. Saad that he wishes he could do more. He wrote that he was upset by what he saw as a lack of empathy in Washington to Fallujah’s plight.

In a Sept. 10 email, Capt. Saad sent Mr. Weston a photo of the commemorative “challenge coins” that military commanders routinely hand out to boost troop morale.

Capt. Saad called them medals, and his collection includes two from the Marines and another from Donald Winter, the visiting secretary of the Navy.

“It was honor time,” Capt. Saad told Mr. Weston. Mr. Weston responded: “The medals show how close the ties were between us over many years. Your work and sacrifices continue.”

Mr. Winter says he doesn’t recall Capt. Saad. The former Navy secretary often gave out several hundred coins during each three- or four-day visit to U.S. and Iraqi personnel. The coins “were highly appreciated,” he says.

Hundreds of other families from Fallujah are in the Kurdish-controlled north, where Capt. Saad lives with 10 family members in a three-bedroom home. Capt. Saad, his wife and their four children share one room. “Just try to stay strong,” Mr. Weston wrote in a recent email.

Capt. Saad lamented the sorry state of the Iraqi police, who gave up their arms in Fallujah without a fight. In contrast, he told Mr. Weston, “we were heros” and made a “great team.”

Capt. Saad’s messages implicitly asked whether America has forgotten its friends in Fallujah.

Mr. Weston wrote his response carefully, using the first person, because he knew he could speak only for himself, not his country.

“I have not forgotten, and I will not,” Mr. Weston wrote.

It’s football season and more of Roger Goodell’s mishandling of the NFL’s personal code! We’re so sick of this NFL tolerance of abuse of…