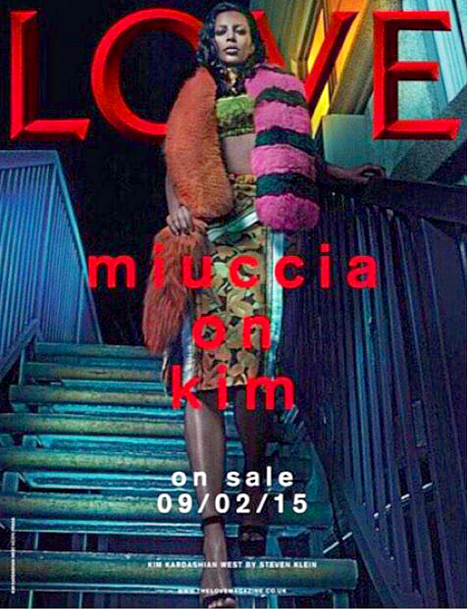 Kim Kardashian‘s mission to break the Internet continues! Less than three months after she stripped down for a headline-making, butt-baring, full-frontal-showing Paper magazine spread, the reality star is once again baring all, this time in an even racier nude photo shoot for the UK’s Love magazine.

Love released several shots from the upcoming issue earlier this week, showing Kardashian, 34, in various Prada looks. But other pictures from the spread (shot by Steven Klein) have been leaking online in the days since — and let’s just say that designer clothes and those bleached eyebrows are not the focus.

At least a couple of the photos show Kanye West‘s wife completely naked and facing the camera straight on. Unlike the Paper full-frontal shot, there’s no strategic posing. Everything (and we mean everything!) is right there for all to see.

Other pictures highlight the star’s most famous asset: her gravity-defying booty. Kardashian herself tweeted out one photo in which she lies naked on a stripped mattress, her bare derriere visible through the window of the room she’s in. She captioned it, “Nothing butt Prada.”

She also shared a shot of herself wearing nothing but a Prada bodysuit, her legs scissored awkwardly in the air. “Casual stretch,” she wrote alongside the pic. (Another tweet about that same setup said she was “locked inside a bedroom at motel 6 blasting Madonna Erotica on repeat & rolling around in a Prada bodysuit at 2am.”)

Still other leaked photos show her bending over naked, her shapely behind facing the camera.

You know the expression: “There’s plenty of fish in the sea!” Anyone who’s ever dated a dud has heard this in regards to the…