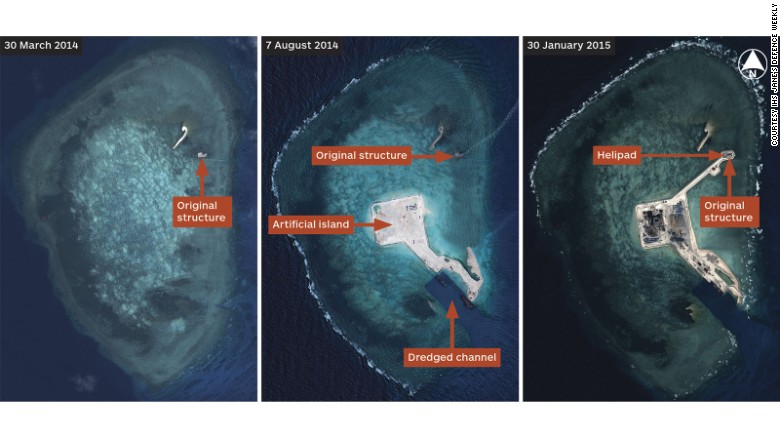 Satellite imagery from 30 March, 7 August 2014 and 30 January 2015 shows the extent of Chinese progress in building an island at Gaven Reefs in the Spratly Islands.

China is building a “significant presence” in disputed waters in the South China Sea through land reclamation, new analysis shows.

Satellite images from late January analyzed by IHS Jane’s Defence Weekly show that China is reclaiming a significant amount of land at three sites in the Spratly Islands, in addition to two other sites previously documented by the defense publication.

“Where it used to have a few, small concrete platforms, it now has full islands with helipads, airstrips, harbors, and facilities to support large numbers of troops,” James Hardy, Jane’s Asia Pacific editor, told CNN.

“We can see that this is a methodical, well-planned campaign to create a chain of air and sea capable fortresses across the center of the Spratly Islands chain.”

In November, the publication reported that China was building an “air strip capable” island at least 3,000 meters long on Fiery Cross Reef.

The South China Sea is the subject of numerous rival — often messy — territorial claims, with China, Brunei, Malaysia, the Philippines, Taiwan and Vietnam disputing sovereignty of several island chains and nearby waters.

The areas in dispute include fertile fishing grounds and potentially rich reserves of undersea natural resources.

The latest images show for the first time reclamation at Hughes Reef — a “large facility” is being constructed on 75,000 square meters of reclaimed land. Jane’s also said that significant progress has been made at Johnson South and Gaven Reefs.

“The buildings on Hughes Reef and Gaven Reefs have almost identical footprints: that of a main square building with what appears to be an anti-aircraft tower or radome at each corner.

“This suggests that China has standardized the design of key facilities and is rolling it out across its new islands.”

Hardy said that Taiwan, Vietnam and the Philippines, which also claim the disputed archipelago, are modifying existing islands but not reclaiming land on a large scale.

He said the reclamation would technically do little to bolster China’s claims to the islands under the United Nations Convention on the Law of the Sea because these have to be based on naturally occurring features.

“That said, if China’s on the ground and is heavily armed, then it is going to be nigh on impossible for anyone to challenge or remove it, so international law is moot on this one,” Hardy said.

China’s Ministry of Defense didn’t immediately respond to a request for comment.

The Cruel and Unusual Execution of Clayton Lockett, the Untold Story of Oklahoma’s Botched Lethal Injection – And America’s Intensifying Fight Over the Death…