Rumor had it that President Obama was only considering nominees for Scalia’s vacant seat on the Supreme Court, who were already GOP favorites. Now, the real drama starts. Today the President nominated Merrick Garland to the high court. From The Atlantic:

“I’ve selected a nominee who is widely recognized not only as one of America’s brightest legal minds, but also a spirit of decency, modesty, integrity, evenhandedness, and excellence,” Obama said when announcing Garland’s nomination. “He is uniquely prepared to serve immediately.”

Garland is the chief judge of the D.C. Circuit Court of Appeals, which is widely considered to be a stepping stone to the Supreme Court. The U.S. Senate confirmed the 63-year-old jurist to that bench by a 76-23 vote in 1997. The White House said Garland “has more federal judicial experience than any other Supreme Court nominee in history” and praised his “rare ability to bring people together.”

Garland’s nomination bucks some recent trends for presidential nominations to the Court. Both Obama and his predecessor, George W. Bush, opted for younger picks who became reliable liberal or conservative voices on the Court. Garland, by contrast, is older than most of the recent Supreme Court justices at the time of their nomination. Many observers also saw him as a relatively moderate option compared to others on Obama’s reported shortlist.

Remember it wasn’t that long ago that Republicans promised to ban any confirmation hearings. The public and press were quit to point out that an act of defiance like that would be a case of what we call, not showing up to work, but it would also be unconstitutional. Some pointed out that Veep Biden called for similar measures, which we found to be an out of context soundbite.

Others pointed out that Obama is on his way out. Though the term “lame duck” is meant for a sitting president’s time after the election of a new president (Obama will be a lame duck after November’s election, not now), Republicans were quick say his nomination of a SCOTUS justice would be unprecedented this late in his term. Unfortunately, that also wasn’t accurate. It’s quite common, and some of the loudest objectors (Grassley & McConnell), should remember that they confirmed Scalia just over a month before the election in 1986. 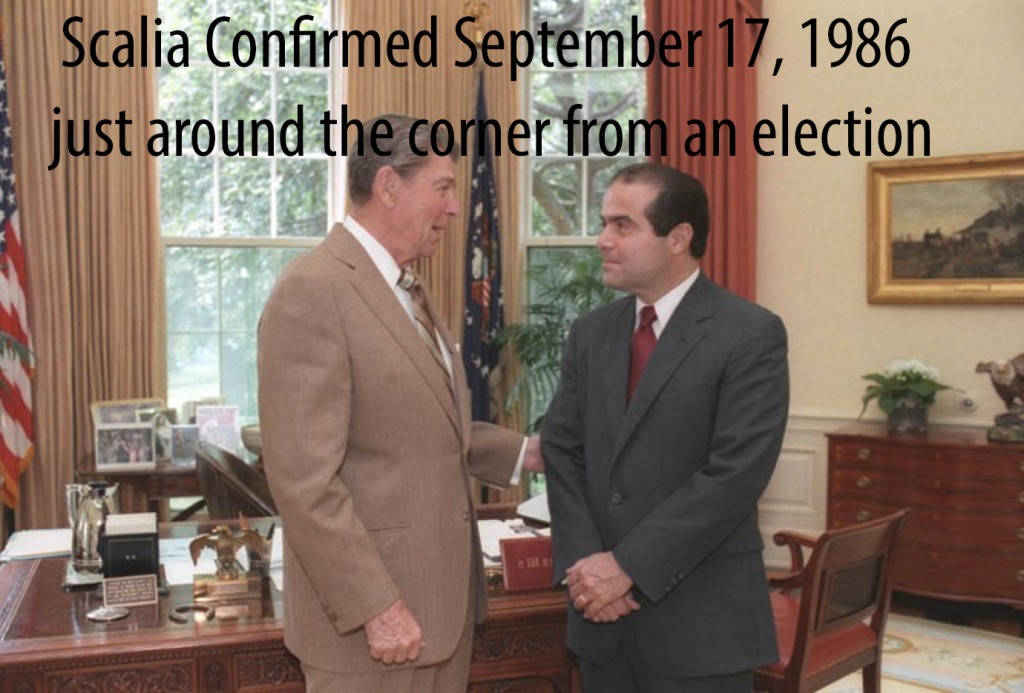 Justice Anthony Kennedy was nominated by President Ronald Reagan in 1987 after his two previous nominations of Robert Bork and Douglas Ginsburg collapsed. He was confirmed in 1988, during an election year, when Democrats controlled the Senate.”

Perhaps forgetful of his own voting record, Sen. Grassley said on Saturday:

“The fact of the matter is that it’s been standard practice over the last 80 years to not confirm Supreme Court nominees during a presidential election year.”

Of course, as steadfast hypocrisy goes, this only gets better.

The late Justice Antonin Scalia was nominated by President Reagan in July of 1986 and confirmed on September 17th, just 48 days before Election Day, when Democrats regained control of the Senate.

There was no bickering over “unfairness” of the process. There was no demand that President Reagan, a lame duck Commander-in-Chief facing the prospect of losing the Senate, wait until the next session of Congress to put forth his nominee.

There was the Constitutional mandate of the President and the duty of the Congress to confirm or reject the President’s nominee.

Senators Mitch McConnell and Chuck Grassley, then the junior and much more youthful members of that legislative body, had no such qualms with the process. Both voted for confirmation of Justice Scalia.

And in the years since, neither senator has expressed regret over that decision.

In a stunning victory, the US women’s soccer team beat Japan for their third World Cup title. “With a blaze that cut through the…